Biscotti is a traditional Italian cookie which requires the dough to be shaped as logs, baked until done, then cooled a bit, sliced and baked again until crispy and crunchy! A perfect companion to your coffee. There’s no other way to describe it except – too good!

Yes, if I may say so myself…this recipe is a keeper. Don’t hunting for other recipes of biscotti because you won’t need one if you try this recipe☺️ This has become my go to recipe for biscotti for the past year or so…and I bake them often!

You can obviously make out how crunchy these are, but definitely not in a bad way! They are crunchy and yet very enjoyable. I will point a few basics that I learnt from this recipe after failing with a couple other recipes in the past.

Essentially, eggs are the only wet ingredients that are added to any biscotti recipe but adding butter or oil can make them richer with obviously a much better texture. This recipe called for oil too but I somehow didn’t like the after taste and hence skipped it after the first trial.

Eggs, yes I have used 1 and a 1/2 egg here…don’t be surprised. I always make half of what this original recipe specifies and trust me, the 1/2 egg is very essential (I realised that too with some trial and error) so do not miss that. However, if you’ve decided to half my recipe, I am not sure how the egg factor will work out! Or probably, ping me later and I will definitely come up with a way for you to do that too ☺️ Else, just use a really small egg. 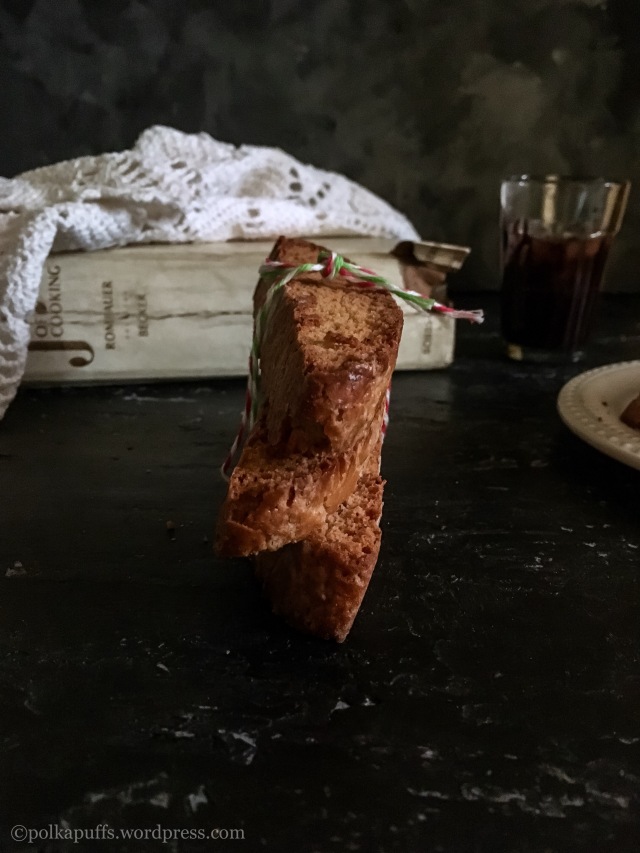 When I talk about my favourite flavour in a biscotti, I will always say Cinnamon! Else, you can even keep it simple by adding adding just vanilla extract, or if you like nuts, add some sliced pistachios or almonds in the dough. However, if you’re using almonds, do toast them slightly to avoid ending up with soggy nuts. The original recipe calls for brown sugar but I have always used regular castor sugar and I am perfectly happy with the flavour! We, my hubby and I love the flavour of dark chocolate hence, I have dunked these biscottis in some melted chocolate once they had cooled off completely. 😋

Making biscotti takes time, it’s the baking twice that takes time and not making its dough. Getting the dough together is a quick mixing job, then this dough needs to be shaped into logs of deliciousness and then bakedonce…and another time too!! 😉

I have added a lot of step by step pictures as always …so you’re pretty much sorted! I don’t think you’ll have a difficult time going forward with it 😊

1 tbsp milk (for the egg wash)

Method: (I am using step numbers, there’s a reason, so follow the steps carefully)

1. In a large bowl, whisk together the flour, cinnamon powder, salt and sugar. 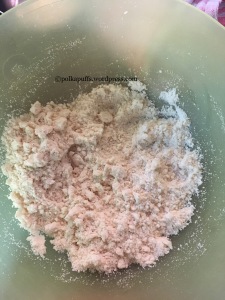 3. Now in a small bowl, whisk one egg. Now remove half of the whisked into another bowl (Save the half whisked egg for egg wash). 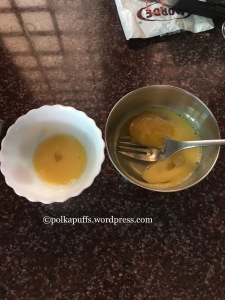 **Add one whole egg to the second bowl in which you have transferred half of a whisked egg. Now whisk this one and a half egg together. Add vanilla extract to the whisked eggs and whisk again.

4. Now add the whisked mixture of eggs and vanilla extract into the flour and butter. Use a large silicon spatula to mix until everything is well moistened but do not over mix. 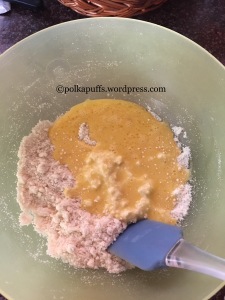 5. Now, sprinkle some flour in a large plate or the working surface. Place the dough on this floured surfaced and knead well for a few minutes. But keep enough loose flour around as this dough is super sticky so you’ll continuously need to dust the surface and your palms too. 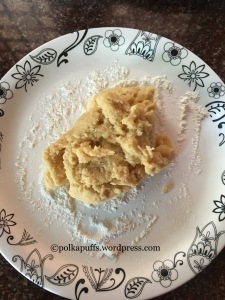 Dont worry about the dough even if it looks too sticky, it will all come together in a few minutes.

6. Shape the dough as shown below and place it on a parchment lined baking tray. I had dusted the parchment paper with some flour too. 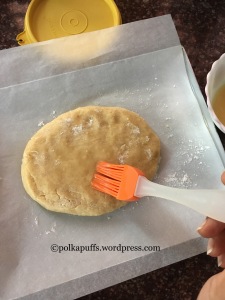 7. We had set aside 1/2 a whisked egg aside, add 1 tbsp of milk to it and whisk again. Use it to Give an egg wash to the shaped dough.

8. Bake this shaped dough at 160’c for 20-25 minutes using the lower heating element. In the last 5 minutes of the baking time, turn on the upper heating elements to give a good colour to the top of the biscotti.

9. Now, let this cool for about 15 minutes but not completely cold. Using a large serrated knife, cut it into 1.5 inch wide slices. Place them on the parchment lined baking tray as shown below.

10. Bake the sliced biscotti on the first side for 7-8 mins. Then flip them over to bake the other side for another 5 mins. Remove them from the oven and let them cool completely before enjoying these crunchy treats with your favourite cuppa! 🤗

11. If you wish to dip them in chocolate too, melt together 30 gms of dark chocolate with 1 tsp of butter over a double boiler or in a microwave. Once the biscotti has cooled completely, dip one end of each biscotti in the melted chocolate, let them dry and then they are ready to serve! You can dip the entire biscotti in chocolate too, no one will judge you 😁 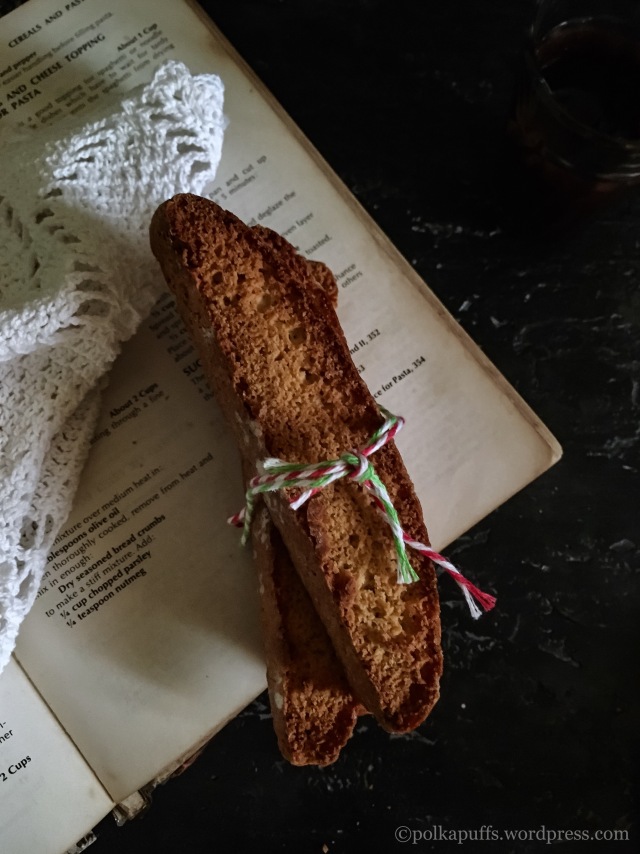 These stay crunchy and fresh in an airtight container for about a week or so.

These can be amazing edible gifts this Holiday Season! 🎄🎁☃️

© Shreya Ashish Tiwari and PolkaPuffs!, 2015-2020. Unauthorised use and/or duplication of this material without express and written permission from this site’s author and/or owner is strictly prohibited. Excerpts and links may be used, provided that full and clear credit is given to Shreya Ashish Tiwari and PolkaPuffs! with appropriate and specific direction to the original content.